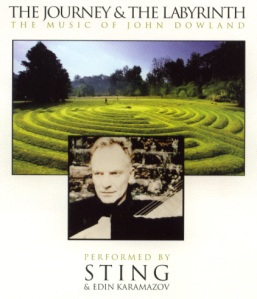 I know this is going to be old news to some people. I first heard of this through PBS in 2006. I just got inspired to write about it now.

Sting, with Edin Karamazov, created a wonderful collaboration, bringing back to life the 400 year-old music of John Dowland. Sting and Edin, both playing lutes, and Sting with his smooth vocals, created an album from Dowland’s pieces, which were made widely available to people in his day. The music has a richness that is wonderful to listen to. The DVD is even better. The locales they play in bring a greater fullness to the whole thing. In addition there are some vignettes where Sting, Edin, and a couple of experts on Dowland discuss the music and his life. Through this you get a small taste of the culture he lived in.

What’s really gratifying is seeing the growth of an artist. Sting is best known for the pop music he created with The Police, and then in his own solo career. The CD contains none of that. Instead what you hear is Sting and Edin really making an effort to bring life back to these old songs, respecting the tradition they came from. The DVD has a little of Sting’s pop music thrown in as well. A few of the selections they put on the DVD are Sting “unplugged” with the lute.

I should add that if you saw the PBS program on this you’ve already seen most of what’s on the DVD. It contains some extras not seen on TV, like the full length concert that Sting and Edin put on, and a rehearsal session.

Overall it’s a wonderful collection if you enjoy quality music with rich themes. I highly recommend it.

2 thoughts on “Wonderful: The Journey & The Labyrinth”